Ayutthaya or Sukhothai: which historical park is better? 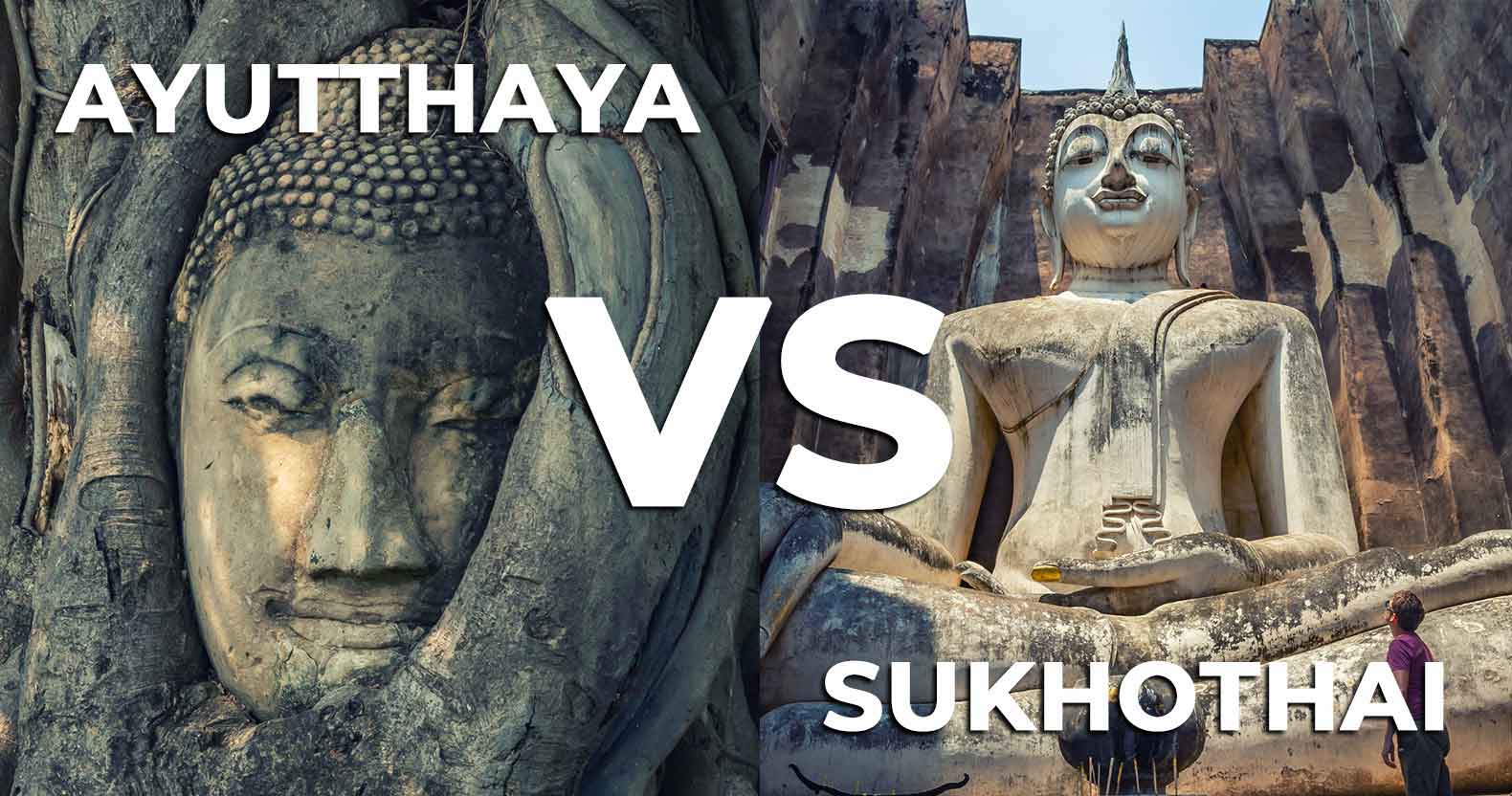 Visiting Thailand means you’ll get your fair share of Buddhist temples, statues and culture. Two of the most most important historical sites in Thailand are the Ayutthaya historical park and the Sukhothai historical park. Both are UNESCO World Heritage sites.

Ayutthaya was founded around 1350 and became the capital within the first Siamese kingdom. Its heyday was between the 14th and 18th century when it was one of the biggest cities in the world and a very important hub for trade and governance. The city met its demise in 1767 when Burmese invaders burned the city to the ground. This also caused the downfall of the Siamese kingdom.

Initially, Sukhothai was the main capital of the Sukhothai kingdom. Although it was a small city, it quickly became a cultural center in the region. Eventually, the region and its city was absorbed by the Ayutthaya kingdom in 1438 BC.

But enough for the history; back to the present day! Both historical sites have a lot to offer and you can wander around the grounds for several days if you like.

But what if you have limited time and you can only visit one? Or you don’t want to suffer from “temple overload” and just want to choose one? Because we visited both, I’m gonna help you choose between the two! Although I can guarantee you that both are worth your while, in the section below I’ll evaluate both sites and tell you our favorite!

Both sites are not that crowded. They are nothing compared to the crowds at, for example, the Royal Palace in Bangkok. The historical sites of Ayutthaya and Sukhothai are both spread out over a big area. So you’ll never have the feeling that you are crowded by other tourists. However, because of Ayutthaya being close to Bangkok you can expect tour groups on a day tour, which significantly adds to the amount of people visiting. Due to its more remote location, Sukhothai doesn’t have these day tourists. As a result, Sukhothai sees less tourism, is quieter and more peaceful.

Verdict: I would say that Sukhothai is the winner here!

This is an easy one. Ayutthaya is close to Bangkok and Sukhothai is way further up north. You can visit Ayutthaya on a day trip from Bangkok and for Sukhothai that is out of the question.

Check out 12go.asia to find your transport options from Bangkok to Ayutthaya or Bangkok to Sukhothai. It’s by far our favorite website to book transportation in Asia!

Ayutthaya has a nice little night market where you can get some great street food! It’s more touristy than Sukhothai, so there are also more good restaurants and hostels to choose from. Furthermore, Ayutthaya is great for cycling, and we love to cycle! Most of the temples are close by and are easily accessible by bike (or even on foot).

Sukhothai is a much quieter town with fewer restaurants and hostels. We couldn’t find a nice night market either, but there are some good stalls with street food. Granted, we stayed in ‘new town’ (= generally cheaper accommodation) and not in ‘old town’ where the historical site is. From the new city to the old city it’s still about a 20 to 30 minute one-way ride by motorbike (this is what we did). You can also take a bicycle if you don’t mind cycling for 45 minutes in the burning sun and heat.

Verdict: A gold medal for Ayutthaya and the first (and only) loser is Sukhothai.

Probably the most important question is: which site is the nicest and most beautiful one? Well, that answer isn’t that simple! Both sites have their own unique structures and highlights.

Ayutthaya has the Buddha face in the tree. It’s one of the classic pictures everyone takes when visiting Ayutthaya. How the face in the tree came to be is anyone’s guess. There’s one theory that after the site’s abandonment nature took over and that a tree grew around the Buddha head. A different story is that a thief once stole the Buddha head from the main temple and hid it near the tree. He (or she) never came back to reclaim it and the tree took it as a souvenir! 😉

Ayutthaya’s historical temples are mainly ruins but there are a lot of them scattered all around the city. We visited some of the top sites: Wat Phra Mahathat (the site with the Buddha face in the tree), Wat Ratchaburana, Wat Chaiwatthanaram. Besides those we visited some smaller free temple complexes.

Sukhothai is called the alternative Angkor Wat. This is because the temple complex has many temples and Buddha statues that are mostly still intact. Although it may not be as grand as Angkor Wat in Cambodia it’s still very impressive to walk among the massive temples.

Also, on Saturdays, the Sukhothai historical temple complex stays open until 9PM. After sunset they turn on the lights, giving the entire complex a beautiful mystical vibe. The sites at Ayutthaya close somewhere between 5PM and 6PM.

Because of the great condition Sukhothai historical park is in and the evening opening hours on Saturday, we believe it to be better than Ayutthaya historical park.

Verdict: Sukhothai is the winner in our eyes!

Tip: In Ayutthaya you still see a lot of tourists riding elephants. Please don’t participate when you’re there (or anywhere in Southeast Asia for that matter). Read all about how you can practice responsible elephant tourism.

In Sukhothai you pay per ‘historical zone’. There are three: the central zone, the northern zone and the western zone. Each costs 100 Baht per person (unless you are Thai, then it’s way cheaper). So if you want to visit all three zones it will set you back 300 Baht.

In Ayutthaya there’s a kind of pay-per-view system. Some of the temples are free and for others you can expect to pay 20 to 50 Baht per person.

So cost-wise Ayutthaya is much more economical. You can select the temples you want to visit and set your own budget in this way. In Sukhothai you will want to visit at least two of the three sites (because you came all this way just for the temples), which will cost you 200 Baht.

Granted, 200 or 300 Baht is still not a huge price to pay, but Ayutthaya is definitely cheaper!

Verdict: Ayutthaya is the cheapest!

If we had to pick one of the two sites to visit it would be Sukhothai historical park. We especially liked it because of the great state the temple ruins were in. We liked that there were hardly any other visitors. And we got to enjoy the park after dark on Saturday evening!

Verdict: Sukthothai was definitely our favourite!

So, Ayutthaya or Sukhothai?

When we don’t count our personal favorite, Ayutthaya is the winner over Sukhothai because of its better location, the nicer city and the cheaper costs. So if you are limited in your time and you don’t fancy traveling hours by bus from either Bangkok (about 8 hours) or Chiang Mai (about 5 hours), I advise you to visit Ayutthaya.

Our personal favorite, however, is Sukhothai because of its fewer crowds and nicer historical site. So if you are traveling from Bangkok to the north anyways, like we did, I reckon you should visit Sukhothai.

And if you have enough time, you should visit both! 😉

Pin It For Later!