24 hours in Bratislava: things to do and see

We stayed in Bratislava, the capital of Slovakia, for 24 hours on our way from Vienna to Budapest and we enjoyed it a lot. Bratislava is fairly small and not yet touched by mass tourism. But this doesn’t mean that it’s a sleepy and boring city; on the contrary! It does mean that most of the top sites are within walking (or cycling) distance from each other. Restaurants offer affordable meals and drinks and you don’t have to fight your way through hordes of tourists.

Bratislava is one of the lesser known European capitals. This is partly because Bratislava hasn’t been a country capital for very long! Before 1993 Slovakia was part of the country Czechoslovakia with Prague being its capital. After its peaceful separation into Czech Republic and Slovakia, Bratislava became the new nations’ capital. But enough with the history lesson.

Below we’ll tell you why you should make a pit stop in Bratislava and what are the things to do and see.

The Slavin War Memorial is a memorial monument remembering the Russian liberation of Bratislava in 1945 from the occupying Nazi’s. The site is also a burial ground for thousands of Russian soldiers who lost their lives while taking over the city.

The monument is an impressive 50 meters high, with a statue of a Russian soldier on top carrying a flag and stepping on the Swastika, the symbol of Nazism. The memorial monument is located on top of a hill overlooking the city of Bratislava, giving you a great view of the city.

Entrance to the memorial is free.

The Church of St. Elizabeth, also known as the Blue Church, is a church built in the Hungarian Art Nouveau style and is, as its name suggest, blue! The building really stands out in its surroundings because of its odd color and decorations. Definitely something different than most churches we’ve seen! The interior is painted and decorated in the same style as the outside. Unfortunately, when we were there the entrance to the church was closed. 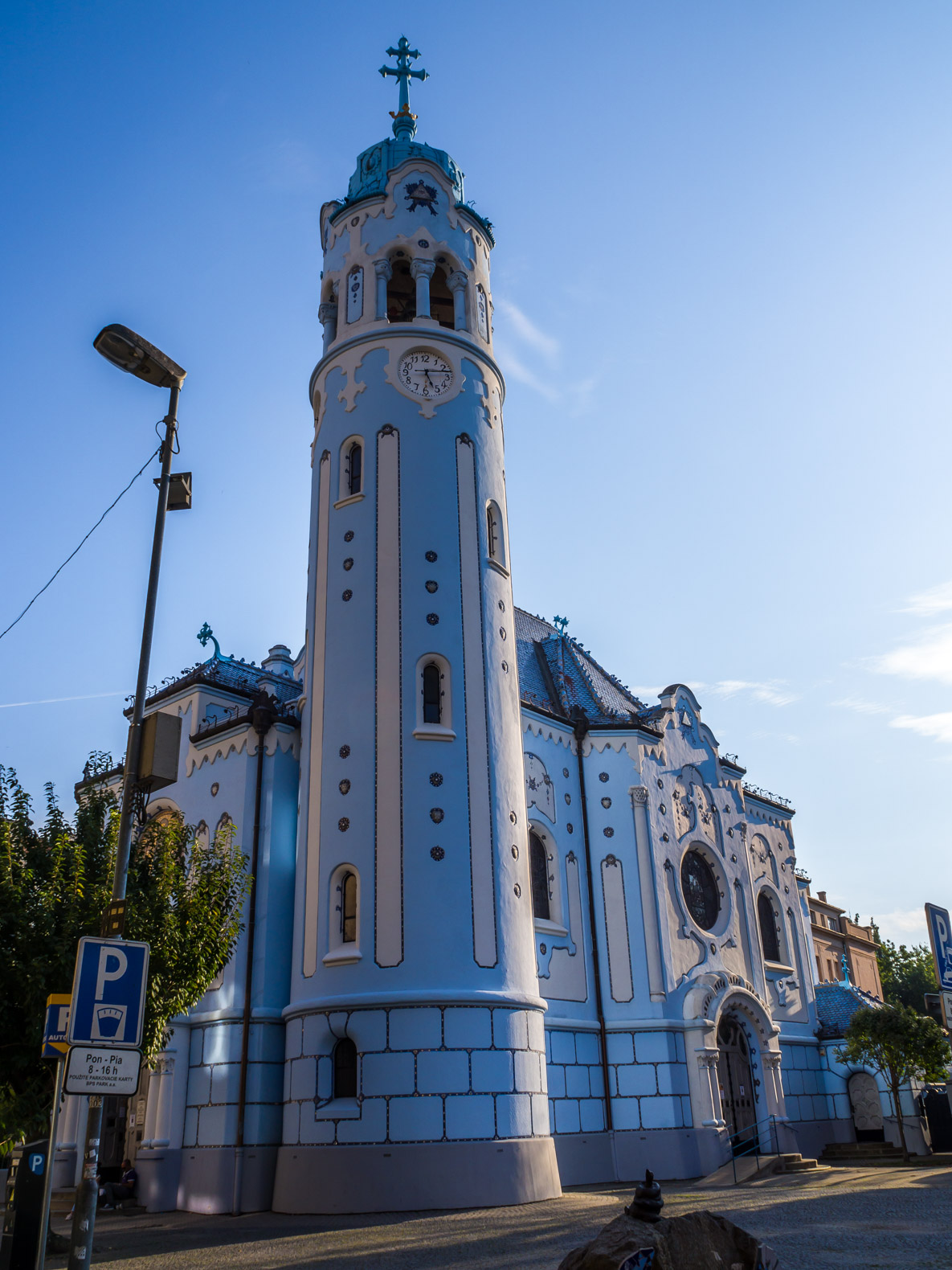 Watch the changing of the guards at Grassalkovich Palace

At around 12 PM we happened to be at Hodžovo Square right in front of Grassalkovich Palace, the seat of the president of Slovakia and stumbled upon the changing of the guards ceremony. At exactly 12 PM the guards in front of the palace were relieved by a fresh batch of guards. It’s all official with a sword being handed over and stuff like that. It reminded me of the changing of the guards at Buckingham Palace in London, although smaller and with way fewer spectators. The ceremony is nice to watch and it lasts for about 10 to 15 minutes.

Beware! The change of the guard only takes place when the president is in Slovakia. Whether or not he actually is, you can easily check: if he’s in the country the Slovakian state flag is raised atop of the palace.

The palace itself is not accessible, as the president is doing his presidential stuff there. The park behind the palace, Grassalkovich Garden (the former palace gardens) is accessible to the public. We haven’t been there as we had to catch a train, but we heard it’s a nice and quiet park in the middle of the bustle of the city!

Michael’s Gate, situated in the historical city center of Bratislaca, is the only remaining tower of the city’s historic defense system. The tower is 51 meters high and has a statue of the archangel Michael slaying a dragon. You can climb the tower and have an overview of the historical city center. The entrance fee to the tower, which also houses the museum of arms, is 4.50 EUR.

On the road going through the gate you can find a zero kilometer plate. On this plate you’ll see the names of several world capitals and their distances from Bratislava.

Bratislava Castle is the biggest eye catcher of the city. Situated on top of a hill, this building is visible from most parts of the city. The castle houses the Museum of History. Entrance to the castle (for a fee, we can’t remember how much, sorry!) grants you a view of the Danube river and Slovakia’s neighboring countries Austria and Hungary. Or you can do like us, and head to a viewpoint right next to Restaurant Parlament and get a great view of both the castle and the city’s surroundings, for free!

Bonus tip: Make use of the city bikes

Although the historical city center of Bratislava is relatively small, one day to see as much as possible isn’t a lot. So instead of walking everywhere, we recommend you to make use of the city bikes. It’s cheap and really easy to register at www.slovnaftbajk.sk. As they’ve only recently introduced this bike system in Bratislava, you can register for an introductory price of 1 EUR. With this (digital) pass you get a text message with your personal pincode that you can use to unlock a bike. If you put the bike back within 30 minutes of unlocking it, it doesn’t cost you anything extra. After the first 30 minutes it is 0.12 EUR per 6 minutes. Really cheap!

You do have to be of a certain fitness to be able to move around the city. Especially the Slavin War Memorial and Bratislava Castle are uphill and will get you sweating in no time!

Tip: Do you need to use the bike for more than 30 minutes? Just lock it at a station after 30 minute, and unlock it again. You can use it again for another 30 minutes, without extra costs! 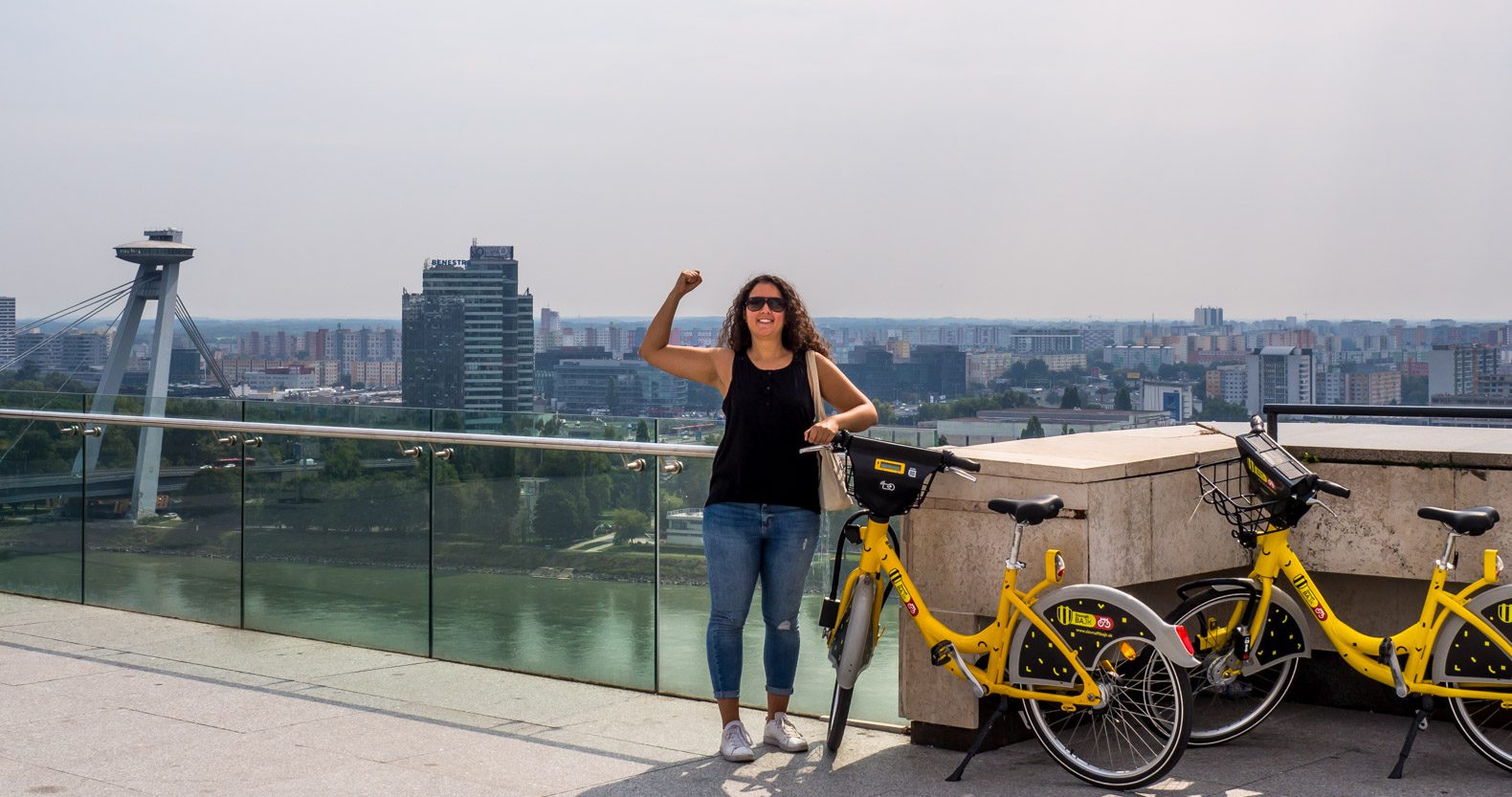 Do you believe we missed something during our 24 hour stay in Bratislava? Let us know in the comments below!